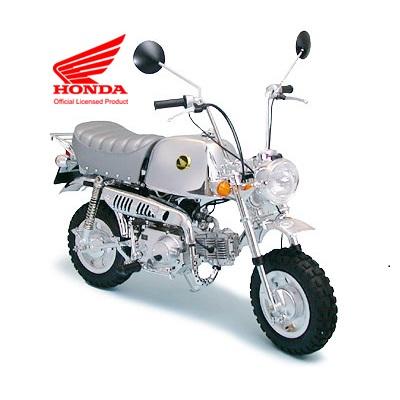 In 1967, Honda Pioneered the field of "leisure motorcycles" with the release of the Monkey. The uniqueness of the Monkey made it an instant hit among the young and young at heart. In August 1978, Honda released the big brother of the Monkey and appropriately named it "Gorilla". Save the gas tank and seat, the Gorilla adopted fundamentally the same parts as the Monkey. The most defining aspect of the Gorilla is its swelled chest, an oversized gas tank, which boasts a capacity of 9 liters providing a 630km maximum running distance. Its powerplant was a 49cc air-cooled single cylinder SOHC engine, which was also used on Honda's best selling Super Cub. The Gorilla was also equipped with a manual 4-speed transmission, opposed to the automatic 3-speed system of the Monkey. Production was ceased in 1992 but the popularity of the machine, however did not dwindle, with the few remaining used Gorillas fetching premium prices. It was in February 1998 when Honda resumed production, this time bringing out a new Gorilla equipped with the Monkey's large headlamp and using chrome parts on the headlight casing, fender and other places. January 1999 saw the production of 3500 "Honda Gorilla Spring Collection" machines. This version was meant to shine, and features chrome parts on virtually every visible part of the bike. The gas tank, the side-cover, the front forks, the chain case, the wheels, the exhaust pipe cover, even the frame and swing arm glisten with gorgeous chrome.

★1/6 scale plastic assembly kit. Overall length: 226mm, width: 104mm, height: 183mm,
★Every characteristic of the 1998 version of the Honda Gorilla such as the larger headlamp, front fork, tank cap and emblems applied on the tank have been accurately replicated.
★Chrome-plated areas of the actual machine have been reproduced with metal-plated parts.
★The 49cc SOHC air-cooled engine has been reproduced down to the finest detail.
★Engine piping and wiring recreated with vinyl pipes.
★Front and rear suspensions are workable thanks to coil springs.
★Decals for both regular and "Spring Collection" version are included.

x been added to your shopping cart.